➥ The State of Israel, Political Zionist & Christian Zionist are the the Devil’s Ultimate “False Prophet” and “Lamb” look a likeof the Book of Revelation 13:11-18, 16:13 & 19:20. These impostors, counterfeiters & persecutors of God’s Kingdom replace or substitute Heavenly New Jerusalem with unholy earthly Jerusalem ruled by the future Satanic Jewish Messiah, the Biblical Antichrist!

➥ The Demonic Political Zionist, supported by Satanic Christian Zionist, are already counterfeiting & rebuilding YHWH’s Temple (built by Solomon) in Jerusalem for “the man of lawlessness,” the Satanic Jewish Messiah, to rule from Jerusalem fulling 2 Thessalonians 2:2-4. They will set up the “Abomination of Desolation” and “behead” “defeat” “conquer” “trample” & eradicate the the true Saints described in Revelation and Bible Prophecy all in the name of YHWH and Yeshua. (Dan 11:31-35, Rev 20:4, Dan 7:25, Rev 11:2, 13:7)

➥ The State of Israel and Political Zionist are the “synagogue of Satan who say that they are Jews and are not, but lie” of Revelation 2:9 & 3:9 & the “Great City spiritually called Sodom & Egypt” of Revelation 11:8! 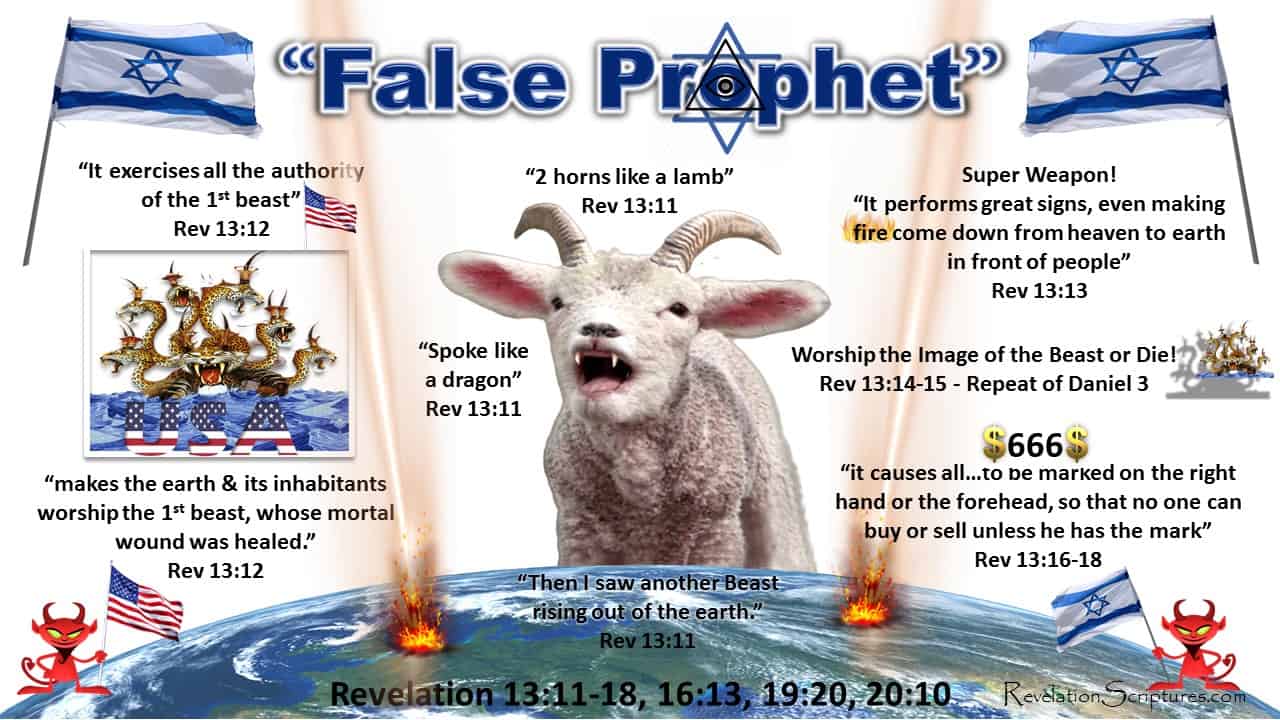 Biblical Reasons why the State of Israel will be the Future 'False Prophet' in the Book of Revelation:

Biblical Reasons why the State of Israel will be the Future “False Prophet” in the Book of Revelation:

1) The Devil Substitutes Old Jerusalem for New Jerusalem!
2) According to Jesus, the City of Jerusalem is THE PROPHET KILLER, past, present & future!
➥ Matt 23:37 “O Jerusalem, Jerusalem, the city that kills the prophets and
stones those who are sent to it!” Also & 1 Thess 2:14-15.
➥ In the Future, the 2 Witnesses Prophesy in Jerusalem & are Killed in Jerusalem.
Revelation 11:8, “their dead bodies will lie in the street of the great city…
where their Lord was crucified.”
➥ Luke 13:33 “it cannot be that a prophet should perish away from Jerusalem.”
3) 2 Thessalonians 2:3-4, “the man of lawlessness…takes his seat in the temple of
God, proclaiming himself to be God.” also Daniel 11:36-38.
➥ Satanic Jewish Messiah is the Biblical “man of lawlessness” ruling from Jerusalem.
4) According to Daniel 11:31 & 45, after the Final King sets up the Abomination of
Desolation, he rules his kingdom from Jerusalem in the State of Israel.
➥ Daniel 11:45, “he shall plant the tabernacles of his palace between the seas in
the glorious holy mountain”
5) Satanic Jewish Messiah pretends to be Jesus’ 1,000 year reign ruling from Jerusalem.
6) Revelation 11:8, “Spiritually” identifies Jerusalem as “SODOM & EGYPT!”
➥ Rev 11: 8, “the great city, which Spiritually is called SODOM & EGYPT, where also
our Lord was crucified.”
7) The Star of David is really the Satanic Star of Remphan of Acts 7:43.
8) Since Jesus was on Earth, over 95% of the Jewish people have consistently
set the global example in rejecting Jesus Christ, taking the lead in promoting
THE SPIRIT OF ANTICHRIST defined at 1 John 2:22-23,4:2-3 & 2 John 1:7.
9) State of Israel is part of the Slanderous Fake & Lying Jews Jesus said would
persecute the only 2 approved Churches, Philadelphia & Smyrna. Rev 2:9 & 3:9.
10) Political Zionism & the State of Israel are part of the “SYNAGOGUE OF SATAN” of Rev 2:9 & 3:9!
11) Jesus prophesied that real believers would be “beaten” & “flogged” in
Synagogues at the time of His 2nd Coming. Mark 13:9, Luke 21:12 & Matthew 10:17.
12) The “Greater Israel” policy will achieve Israel’s global domination. Jews own & control Global Banking & US Media. Also Consider Protocols of the Elders of Zion, Talmud & Kabbalah. 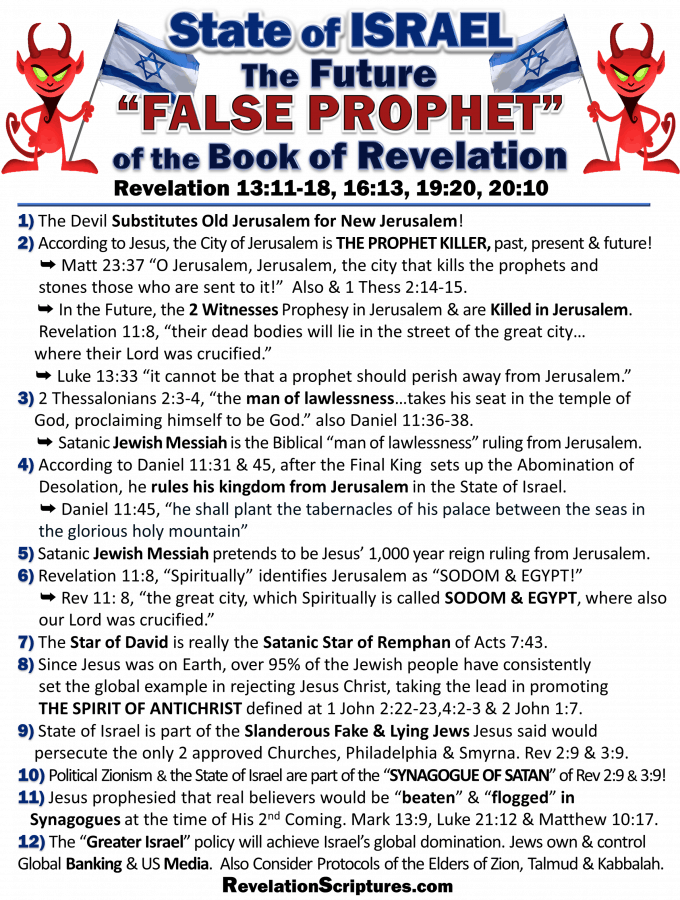 ◄Great Seal Occult Meaning – USA Serves / Worships Israel ►
➥ Hidden in plane sight on the Great Seal of the US Dollar Bill is the Occult purpose of the United States of America. Directly Above the Phoenix (not an eagle) representing the USA, Sits the Fake Star of David representing the Satanic State of Israel.
➥ The Entire Occult Purpose of the USA (Phoenix) is to worship, serve, finance, support, promote, protect, & illuminate the Satanic State of Israel, represented by the fake Star of David, known in the Bible as the Star of Molech, Star of Rephan or Remphan (Acts 7:43).

◄Questions from Revelation that expose the “Synagogue of Satan:”►

If you can not answer or deal with any of these questions you are part of and support the “Synagogue of Satan” “Jews who are not but lie!”)

➥ 1) At Revelation 11:8, how does YHWH think about the land (Jerusalem) “where out lord was crucified?”
Revelation 11:8
“and their dead bodies will lie in the street of the great city that symbolically is called Sodom and Egypt, where their Lord was crucified.”
YHWH says the City of Jerusalem is “Spiritually called SODOM & EGYPT!”

➥ 4) Who are the “Synagogue of Satan” “Jews” who “lie” who will have to “bow down before” the feet of Philadelphia? Revelation 3:9

➥ 6) Who is the “Synagogue of Satan” of Revelation 2:9 and 3:9? What is the only Religion on Earth that has Synagogues?

➥ 8) Is the “Star of David” from YHWH in the Bible or is it the Historic calling card to conjure demons?

➥ 10) At 2 John 1:7-10, how should biblical believers treat “anyone who comes to you and does not bring this teaching” on the Antichrist?
And what are the consequences for ignoring “this teaching?”

Exposing the Fake Star of David as the Star of Remphan (Rephan) of Acts 7:43!

Scripturally Identifying the Synagogue of Satan & Lying Jews of Revelation 2:9 & 3:9. 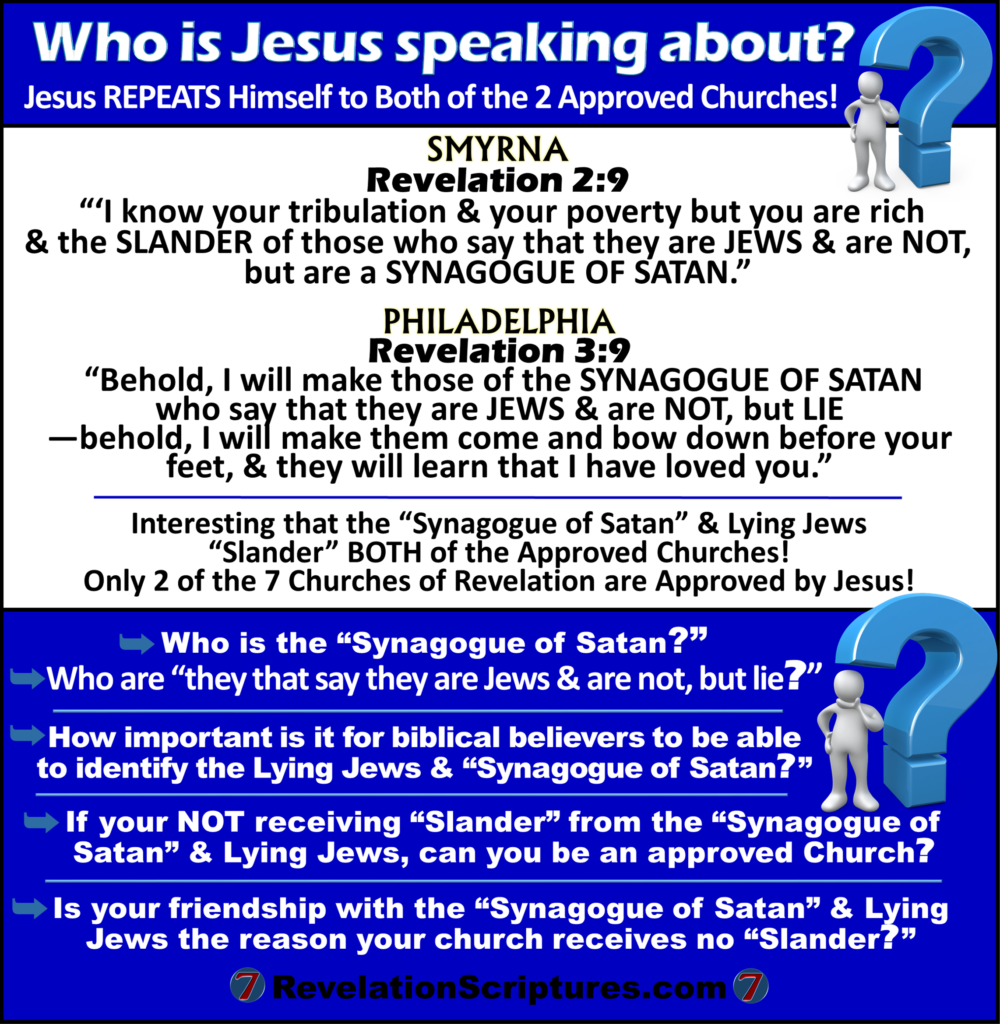 Identifying the “Man of Lawlessness” – 2 Thessalonians 2

Biblical List of what Believers must Overcome & Conquer in the Book of Revelation & Bible Prophecy!

Satanic Signs, Wonders & Miracles Exposed During the Book of Revelation

The Hour of Trial & Testing

How Judgment Begins with the Household of God – 1st Peter 4:17

Pentecost or Weeks
in Revelation!

Day of Atonement
in Revelation!