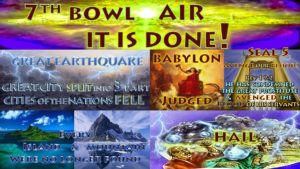 The Seventh Bowl
Revelation 17:17 The seventh angel poured out his bowl into the air, and a loud voice came out of the temple, from the throne, saying, “It is done!” 18 And there were flashes of lightning, rumblings,[c] peals of thunder, and a great earthquake such as there had never been since man was on the earth, so great was that earthquake. 19 The great city was split into three parts, and the cities of the nations fell, and God remembered Babylon the great, to make her drain the cup of the wine of the fury of his wrath. 20 And every island fled away, and no mountains were to be found. 21 And great hailstones, about one hundred pounds[d] each, fell from heaven on people; and they cursed God for the plague of the hail, because the plague was so severe.