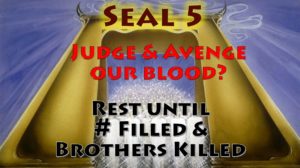 Revelation 9:9 When he opened the fifth seal, I saw under the altar the souls of those who had been slain for the word of God and for the witness they had borne. 10 They cried out with a loud voice, “O Sovereign Lord, holy and true, how long before you will judge and avenge our blood on those who dwell on the earth?” 11 Then they were each given a white robe and told to rest a little longer, until the number of their fellow servants and their brothers[d] should be complete, who were to be killed as they themselves had been.