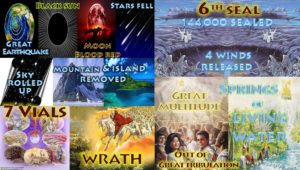 Revelation 6:12 When he opened the sixth seal, I looked, and behold, there was a great earthquake, and the sun became black as sackcloth, the full moon became like blood, 13 and the stars of the sky fell to the earth as the fig tree sheds its winter fruit when shaken by a gale. 14 The sky vanished like a scroll that is being rolled up, and every mountain and island was removed from its place. 15 Then the kings of the earth and the great ones and the generals and the rich and the powerful, and everyone, slave[e] and free, hid themselves in the caves and among the rocks of the mountains, 16 calling to the mountains and rocks, “Fall on us and hide us from the face of him who is seated on the throne, and from the wrath of the Lamb, 17 for the great day of their wrath has come, and who can stand?”

The 144,000 of Israel Sealed
7 After this I saw four angels standing at the four corners of the earth, holding back the four winds of the earth, that no wind might blow on earth or sea or against any tree. 2 Then I saw another angel ascending from the rising of the sun, with the seal of the living God, and he called with a loud voice to the four angels who had been given power to harm earth and sea, 3 saying, “Do not harm the earth or the sea or the trees, until we have sealed the servants[a] of our God on their foreheads.” 4 And I heard the number of the sealed, 144,000, sealed from every tribe of the sons of Israel:

13 Then one of the elders addressed me, saying, “Who are these, clothed in white robes, and from where have they come?” 14 I said to him, “Sir, you know.” And he said to me, “These are the ones coming out of the great tribulation. They have washed their robes and made them white in the blood of the Lamb.

15 “Therefore they are before the throne of God,
and serve him day and night in his temple;
and he who sits on the throne will shelter them with his presence.
16 They shall hunger no more, neither thirst anymore;
the sun shall not strike them,
nor any scorching heat.
17 For the Lamb in the midst of the throne will be their shepherd,
and he will guide them to springs of living water,
and God will wipe away every tear from their eyes.”