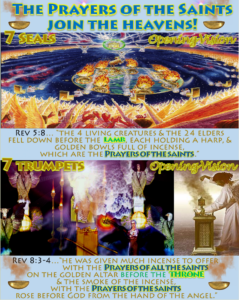 The “Prayers of the Saints” are offered as “Incense” in both the Opening Vision of the 7 Seals & the Opening Vision of the 7 Trumpets! Their “prayers,” pictured as “golden bowls of Incense,” are “offered” “before” “the Throne” in Revelation 5:7-8 & 8:3.
The Saints will have the future amazing opportunity for their prayers to join & participate in “Spirit & Truth” in Both Heavenly Visions of the 7 Seals & 7 Trumpets fulfilling our Father’s beautiful words in the Book of Revelation! If you are a Saint, your Prayers will be “offered” as “Incense” “before the Throne!” WOW!!!

➠ Revelation 5:6-8, 7 Seals Opening Vision
“ And between the throne and the four living creatures and among the elders I saw a Lamb standing, as though it had been slain, with seven horns and with seven eyes, which are the seven spirits of God sent out into all the earth. 7 And he went and took the scroll from the right hand of him who was seated on the throne. 8 And when he had taken the scroll, the four living creatures and the twenty-four elders fell down before the Lamb, each holding a harp, and golden bowls full of incense, which are the prayers of the saints.”

➠ Revelation 8:2-5, 7 Trumpets Opening Vision
2 Then I saw the seven angels who stand before God, and seven trumpets were given to them. 3 And another angel came and stood at the altar with a golden censer, and he was given much incense to offer with the prayers of all the saints on the golden altar before the throne, 4 and the smoke of the incense, with the prayers of the saints, rose before God from the hand of the angel. 5 Then the angel took the censer and filled it with fire from the altar and threw it on the earth, and there were peals of thunder, rumblings, flashes of lightning, and an earthquake.

➠ Exodus 30 – YHWH’s Instruction for Altar of Incense
“You shall make an altar on which to burn incense; you shall make it of acacia wood. 2 A cubit shall be its length, and a cubit its breadth. It shall be square, and two cubits shall be its height. Its horns shall be of one piece with it…
6 And you shall put it in front of the veil that is above the ark of the testimony, in front of the mercy seat that is above the testimony, where I will meet with you. 7 And Aaron shall burn fragrant incense on it. Every morning when he dresses the lamps he shall burn it, 8 and when Aaron sets up the lamps at twilight, he shall burn it, a regular incense offering before the Lord throughout your generations. 9 You shall not offer unauthorized incense on it, or a burnt offering, or a grain offering, and you shall not pour a drink offering on it.

➠ Leviticus 16 – The Day of Atonement
3 But in this way Aaron shall come into the Holy Place: with a bull from the herd for a sin offering and a ram for a burnt offering…
12 And he shall take a censer full of coals of fire from the altar before the Lord, and two handfuls of sweet incense beaten small, and he shall bring it inside the veil 13 and put the incense on the fire before the Lord, that the cloud of the incense may cover the mercy seat that is over the testimony, so that he does not die…
29 “And it shall be a statute to you forever that in the seventh month, on the tenth day of the month, you shall afflict yourselves and shall do no work, either the native or the stranger who sojourns among you. 30 For on this day shall atonement be made for you to cleanse you. You shall be clean before the Lord from all your sins. 31 It is a Sabbath of solemn rest to you, and you shall afflict yourselves; it is a statute forever.

➠ 2 Chronicles 26 – King Uzziah’s Leprosy for “Unauthorized Incense”
16 But when he was strong, he grew proud, to his destruction. For he was unfaithful to the Lord his God and entered the temple of the Lord to burn incense on the altar of incense. 17 But Azariah the priest went in after him, with eighty priests of the Lord who were men of valor, 18 and they withstood King Uzziah and said to him, “It is not for you, Uzziah, to burn incense to the Lord, but for the priests, the sons of Aaron, who are consecrated to burn incense. Go out of the sanctuary, for you have done wrong, and it will bring you no honor from the Lord God.” 19 Then Uzziah was angry. Now he had a censer in his hand to burn incense, and when he became angry with the priests, leprosy broke out on his forehead in the presence of the priests in the house of the Lord, by the altar of incense. 20 And Azariah the chief priest and all the priests looked at him, and behold, he was leprous in his forehead! And they rushed him out quickly, and he himself hurried to go out, because the Lord had struck him. 21 And King Uzziah was a leper to the day of his death, and being a leper lived in a separate house, for he was excluded from the house of the Lord…

➠ Isaiah 1
4 Ah, sinful nation,
a people laden with iniquity,
offspring of evildoers,
children who deal corruptly!
They have forsaken the Lord,
they have despised the Holy One of Israel,
they are utterly estranged…
12 “When you come to appear before me,
who has required of you
this trampling of my courts?
13 Bring no more vain offerings;
incense is an abomination to me.
New moon and Sabbath and the calling of convocations—
I cannot endure iniquity and solemn assembly.
14 Your new moons and your appointed feasts
my soul hates;
they have become a burden to me;
I am weary of bearing them.
15 When you spread out your hands,
I will hide my eyes from you;
even though you make many prayers,
I will not listen;
your hands are full of blood.
16 Wash yourselves; make yourselves clean;
remove the evil of your deeds from before my eyes;
cease to do evil,
17 learn to do good; seek justice,
correct oppression; bring justice to the fatherless,
plead the widow’s cause.
18 “Come now, let us reason together, says the Lord:
though your sins are like scarlet,
they shall be as white as snow;
though they are red like crimson,
they shall become like wool.
19 If you are willing and obedient,
you shall eat the good of the land;
20 but if you refuse and rebel,
you shall be eaten by the sword;
for the mouth of the Lord has spoken.”

➠ Numbers 16 – Korah & Companions Death for “Unauthorized Incense”
Now Korah the son of Izhar, son of Kohath, son of Levi, and Dathan and Abiram the sons of Eliab, and On the son of Peleth, sons of Reuben, took men. 2 And they rose up before Moses, with a number of the people of Israel, 250 chiefs of the congregation, chosen from the assembly, well-known men. 3 They assembled themselves together against Moses and against Aaron and said to them, “You have gone too far! For all in the congregation are holy, every one of them, and the Lord is among them. Why then do you exalt yourselves above the assembly of the Lord?”4 When Moses heard it, he fell on his face, 5 and he said to Korah and all his company, “In the morning the Lord will show who is his, and who is holy, and will bring him near to him. The one whom he chooses he will bring near to him. 6 Do this: take censers, Korah and all his company;7 put fire in them and put incense on them before the Lord tomorrow, and the man whom the Lord chooses shall be the holy one. You have gone too far, sons of Levi!”…
16 And Moses said to Korah, “Be present, you and all your company, before the Lord, you and they, and Aaron, tomorrow. 17 And let every one of you take his censer and put incense on it, and every one of you bring before the Lord his censer, 250 censers; you also, and Aaron, each his censer.”18 So every man took his censer and put fire in them and laid incense on them and stood at the entrance of the tent of meeting with Moses and Aaron. 19 Then Korah assembled all the congregation against them at the entrance of the tent of meeting. And the glory of the Lord appeared to all the congregation…
32 And the earth opened its mouth and swallowed them up, with their households and all the people who belonged to Korah and all their goods. 33 So they and all that belonged to them went down alive into Sheol, and the earth closed over them, and they perished from the midst of the assembly. 34 And all Israel who were around them fled at their cry, for they said, “Lest the earth swallow us up!” 35 And fire came out from the Lord and consumed the 250 men offering the incense.
36 Then the Lord spoke to Moses, saying, 37 “Tell Eleazar the son of Aaron the priest to take up the censers out of the blaze. Then scatter the fire far and wide, for they have become holy. 38 As for the censers of these men who have sinned at the cost of their lives, let them be made into hammered plates as a covering for the altar, for they offered them before the Lord, and they became holy. Thus they shall be a sign to the people of Israel.” 39 So Eleazar the priest took the bronze censers, which those who were burned had offered, and they were hammered out as a covering for the altar, 40 to be a reminder to the people of Israel, so that no outsider, who is not of the descendants of Aaron, should draw near to burn incense before the Lord, lest he become like Korah and his company—as the Lord said to him through Moses.
41 But on the next day all the congregation of the people of Israel grumbled against Moses and against Aaron, saying, “You have killed the people of the Lord.” 42 And when the congregation had assembled against Moses and against Aaron, they turned toward the tent of meeting. And behold, the cloud covered it, and the glory of the Lord appeared. 43 And Moses and Aaron came to the front of the tent of meeting, 44 and the Lord spoke to Moses, saying, 45 “Get away from the midst of this congregation, that I may consume them in a moment.” And they fell on their faces.46 And Moses said to Aaron, “Take your censer, and put fire on it from off the altar and lay incense on it and carry it quickly to the congregation and make atonement for them, for wrath has gone out from the Lord; the plague has begun.” 47 So Aaron took it as Moses said and ran into the midst of the assembly. And behold, the plague had already begun among the people. And he put on the incense and made atonement for the people. 48 And he stood between the dead and the living, and the plague was stopped. 49 Now those who died in the plague were 14,700, besides those who died in the affair of Korah. 50 And Aaron returned to Moses at the entrance of the tent of meeting, when the plague was stopped.
─────────────────────────