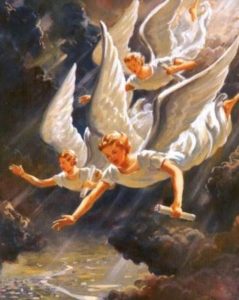 Revelation 14
The Messages of the Three Angels

6 Then I saw another angel flying directly overhead, with an eternal gospel to proclaim to those who dwell on earth, to every nation and tribe and language and people. 7 And he said with a loud voice, “Fear God and give him glory, because the hour of his judgment has come, and worship him who made heaven and earth, the sea and the springs of water.”

8 Another angel, a second, followed, saying, “Fallen, fallen is Babylon the great, she who made all nations drink the wine of the passion[a] of her sexual immorality.”

9 And another angel, a third, followed them, saying with a loud voice, “If anyone worships the beast and its image and receives a mark on his forehead or on his hand, 10 he also will drink the wine of God’s wrath, poured full strength into the cup of his anger, and he will be tormented with fire and sulfur in the presence of the holy angels and in the presence of the Lamb. 11 And the smoke of their torment goes up forever and ever, and they have no rest, day or night, these worshipers of the beast and its image, and whoever receives the mark of its name.”

12 Here is a call for the endurance of the saints, those who keep the commandments of God and their faith in Jesus.[b]

13 And I heard a voice from heaven saying, “Write this: Blessed are the dead who die in the Lord from now on.” “Blessed indeed,” says the Spirit, “that they may rest from their labors, for their deeds follow them!”